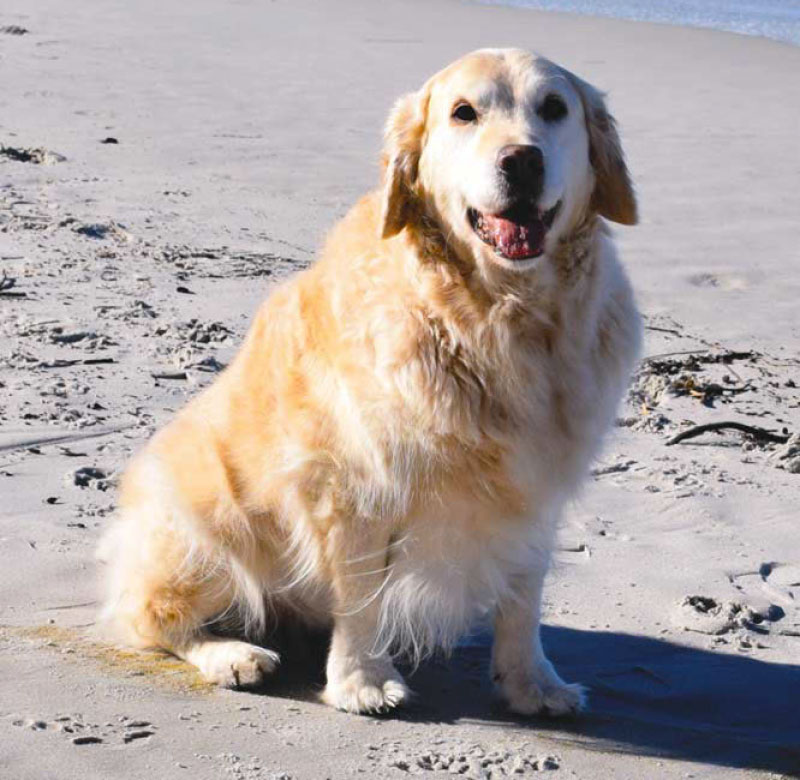 HER FAMILY could leave the front door open, and she would never leave. Unless a cat or a bunny or a ball were to whiz by. Ellie is motivated mostly by things that move really fast.

An English cream Golden Retriever, Ellie has a soft, almond-colored coat. Born in Portland, Oregon, she arrived in Chicago via Continental Airlines at 8 weeks, to the delight of her person who, between jobs, was happy to focus on her puppy.

Yet when Ellie was 6 months old, her person got a job and no longer had time to give her the attention she needed. She called her parents and said, “My veterinarian and my trainer want Ellie; I’ll give you third dibs on her.”

Her parents pulled rank. “Ellie is a hand-me-up from our eldest daughter,” said Dad, who lives in Pasadera. “Our daughter had put her through puppy training, so we put her in another program, more to train us than the dog. She is so well behaved. For a long time, she didn’t even bark.”

Ellie, now 9, is usually mellow, until she gets to Carmel Beach. As soon as she hits the sand, she heads straight to the shore. “When we play catch with her,” said Dad, “every few catches she runs into the water and lies down. She always faces the beach and never lets a wave break over her head.”

Ellie prefers to play catch with a tennis ball, but she also has plenty of stuffed toys and is very clear about her preferences.

“We had a box of our daughter’s Sandy Claws By Lisa Crawford Watson stuffed animals, which we decided to give to Ellie,” said Dad. “We held up each animal and, if she liked it, she took it. If not, she turned her head. She does the same thing with treats at the dog store in Carmel. She has a definitive personality.” 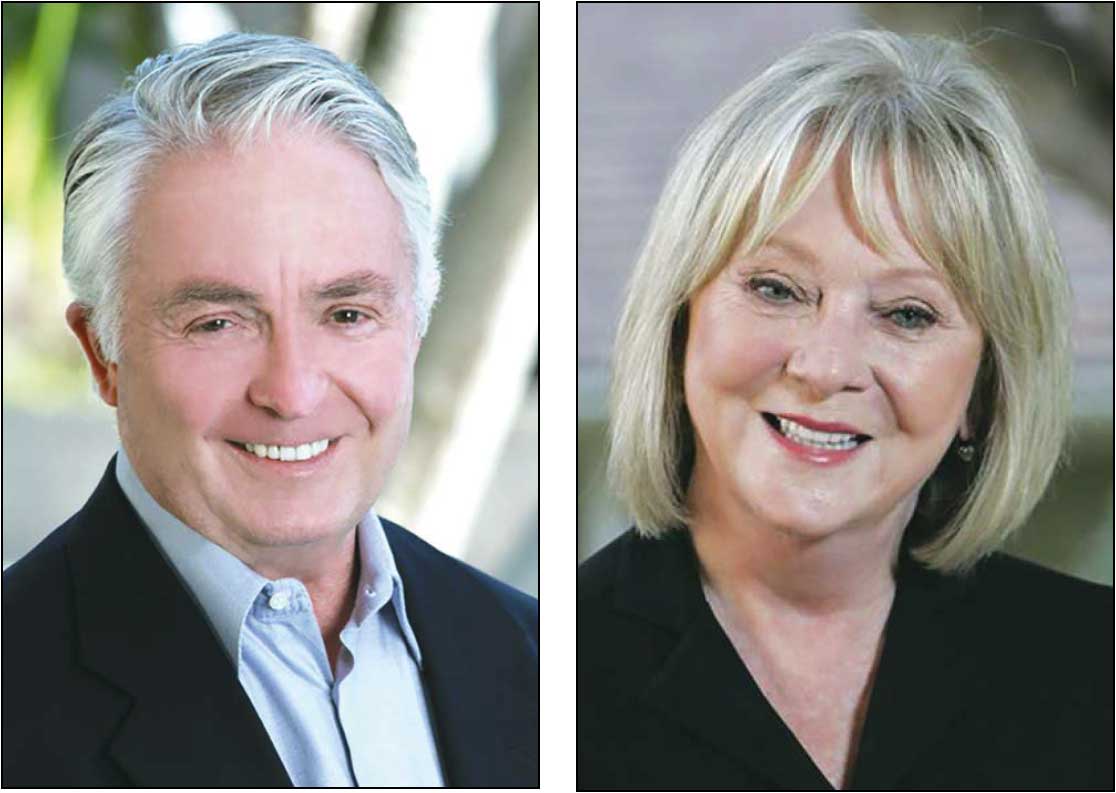 Jim Swallow (left) and his wife, Sharon, are committed to motivating the next generation to succeed, whether it takes days — or years.

YOU’D THINK after raising two kids and becoming grandparents to three more, Jim and Sharon Swallow would have done their share when it came to passing on wisdom to the younger generations.

But they weren’t content to keep that wisdom within the confines of their own family, and when each of them saw a need in their community to mentor others and help them along, they decided to step up to the task.

Jim, who gave his age as “over 65,” is a real estate agent with Keller Williams, and his career includes graduating from the Air Force Academy in Colorado, followed by 22 years total of active duty and reserve time, and a stint at Proctor and Gamble. Now, he mentors entrepreneurs in a competition for start-ups hosted by CSUMB.

In the challenge, entrepreneurs go head-to-head for prizes ranging from $1,500 in the student division, to $20,000 in the venture division. Finalists are matched up with mentors who help them work out five-minute pitches for their businesses to judges in the “Otter Tank.”

Jim said he got involved in the event through the Carmelby-the-Sea Rotary Club, which he said he’s “grateful and blessed to be part of.” He said he enjoys being able to give back to the community and, by the way, he had a great time walking in the Centennial Parade.

Not to be outdone, about three-and-a-half years ago, Sharon, also a realtor who works with Jim, got involved in First Tee’s Pay It Forward scholarship program at CSUMB. The privately funded program provides fouryear scholarships to kids in Monterey County who are among the first generation in their families to go to college.

But there’s a twist. Instead of writing a check for the tuition and leaving it up to the kid to sink or swim, the program pairs each student with a mentor from the community and provides support and structure to increase the chances of success.

Participants go through a careful selection process. They have to maintain a 2.5 GPA, participate in meetings with their mentors and each other, and fulfill other expectations, including mentoring a child in the First Tee program. If they don’t meet the requirements, they can lose their scholarships. Sharon explained that when nobody in your family has been to college, there’s no road map or context to help you understand what to expect, and it can be overwhelming. She also said that parents don’t always recognize the value of an education and sometimes pressure students to drop out and work to help support the family.

When she signed up, Sharon knew it was a big commitment — mentors stick with their students for four years. Then she met Diana Mejia, a graduate of Marina High School, born in the United States to parents who, decades ago, fled the violence and crime in their native El Salvador.

They have been supportive of their daughter’s college journey, and are looking forward to celebrating her graduation in just a few months. But the picture wasn’t rosy from the start, and success wasn’t guaranteed.

Sharon said at first, Diana was so shy she could hardly hold a conversation with her. But she gradually opened up, and they began setting goals. Diana wanted to major in graphic design to become a fashion designer.

Sharon said she was surprised to discover that although she was 18, Diana still hadn’t learned to drive. Neither of her parents knew how, and her dad spent two hours each way going to and from his job at Whole Foods in Monterey by bus. Sharon prodded Diana to have her brother teach her, and soon she was proudly driving her dad to work.

The next step was for Diana find a job. She’d never had one before, so Sharon guided her through those waters, too, and her father helped her get a job at Whole Foods, which she loved. Together, Sharon and Diana prioritized her goals and wrote out a weekly schedule so she could accomplish the most important ones.

Then, Sharon became determined to broaden Diana’s world. She took her to different ethnic restaurants and introduced to her other cultures, and she took her to museums. One of Diana’s goals was to travel, but there wasn’t a big budget available for that. Still, she applied for programs to study abroad and scholarships to support them.

And soon she was off to spend a month with a family in Spain. She’s also been to France, Italy, Monaco and Germany. Sharon said Diana’s opened up a lot since their first meeting, adding that Diana had to quit her job because she got two paid internships at the college — again with a little nudge from Sharon. Now she’s helping the straight-A student — who’s added a business minor to her studies — to apply to graduate school, and she’s nearly as proud as if Diana were her own daughter.

The effects of Sharon’s coaching extended to the rest of the family, too. Now Diana’s mother and sister, who at first couldn’t understand why she wanted to travel, are starting to talk about taking a trip somewhere.

Sharon said she most recently helped Diana to write her personal statement — a required essay — for graduate school. Sharon said, “I told her, ‘You’re living the American dream. You’re why people come here. Tell that story.’” She also wrote a glowing letter of recommendation for her.

If all goes according to plan, Diana’s family will have an excuse to travel in the near future. She’s hoping to get into the prestigious Parsons School of Design in New York City. “She has a life full of possibilities which is exactly what I wanted for her since the day we first met,” said Sharon.

At Swallow Properties we are there for the client. We believe that integrity, honesty and trust are the bedrock of all real estate transactions. We will always provide personal attention to our clients, keep lines of communication open and see that their needs are being met. We are all about helping people realize their real estate dreams and aspirations.